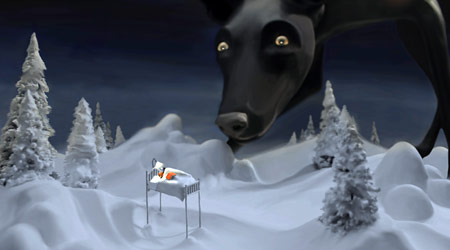 Martin & Muñoz are an art team best known for their "Travelers" series of snow globes and photographs. In the world that they have developed, blizzard-transformed landscapes often serve as backdrops for enigmatic narratives. These are in some instances angst-dream inspired. Others are hard times fables. There is a socio-political as well as a psychological aspect to these images and sculptures. As is often the case with this couple's work, the narratives have an unfinished open ended quality.

For this exhibition, Martin & Muñoz have chosen night as a back drop. Fires, flashlights and moonlight puncture the dark to expressive effect. Important details and aspects of the narratives are lent a dynamic chiaroscuro where the interplay of light and dark shape both the mood and contour of the subject. Some of the images and snow globes depict a sort of dystopian Kinderland. This is a place where children have no parents, a place where adults appear only as an opposing tribe. Some of characters depicted and developed in this group of photos include: a giant black dog, a band of rogue tree children and a nefarious priesthood. A small group of related snow globes will also be exhibited.

Walter Martin and Paloma Muñoz have been collaborating since 1993 and have since exhibited internationally. Their work is in numerous museum collections, including the Museo Nacional Centro de Arte Reina Sofia in Madrid, the Nerman Museum of Contemporary Art in Overland Park, Kansas, and the KIASMA Museum of Contemporary art in Helsinki, Finland. Recently their work was featured in group exhibitions at the Bellevue Arts Museum, Bellevue, Washington; the Museum of Art and Design, New York, NY and the University of Michigan in Ann Arbor, Michigan. Concurrent with the exhibition at P.P.O.W the artists are participating in the exhibition Fairytales, Monsters and the Genetic Imagination at the Frist Center for the Visual Arts in Nashville, Tennessee.