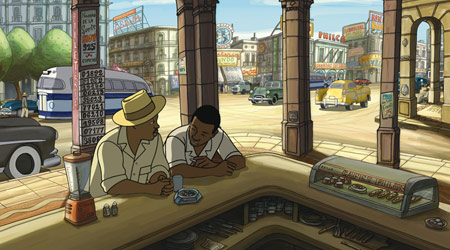 Chico & Rita, a gifted songwriter and beautiful singer chase their dreams —and each other— from Havana to New York and Las Vegas.

A sexy, soulful animation for grown-ups! All buzz, color, and sublime jazz, Chico & Rita is an instant classic!

Oscar-winning director Fernando Trueba (Belle Epoque) and Spain's most famous and successful designer Javier Mariscal create a passionate and animated love story. Close collaborators and friends for many years, Trueba and Mariscal celebrate their passion for the music and culture of Cuba with an epic story of love and heartbreak, set against the color and bustle of Havana, New York, Las Vegas, Hollywood and Paris in the late 40's and early 50's.

In Chico & Rita, Chico is a young piano player with big dreams. Rita is a beautiful singer with an extraordinary voice. Music and romantic desire unite them, but their journey &in the tradition of the Latin ballad, the bolero& brings heartache and torment.

Chico & Rita opens February 10th at the Angelika Film Center in New York City. Q&A with the directors on opening weekend. In Spanish with English subtitles.