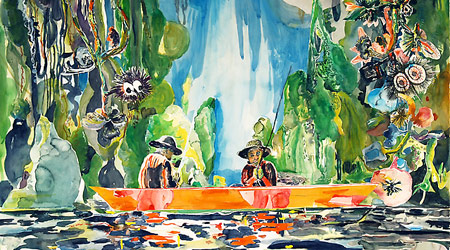 Three years after tackling themes and images from the quintessential work of Spanish satirical-heroism, Cervantes' Don Quixote, Santi Moix animates the ultimate allegory of American cultural-heroism, Mark Twain's Adventures of Huckleberry Finn. Moix's series of watercolors, collages, and wall-drawings transcribe the optimism, color, and vernacular panache of Twain's characters and prose. They also represent a witty confrontation between the artist and his adopted land; the works on exhibit are the quasi-autobiographical Adventures of Santi Moix.

Just as Twain described antebellum Mississippi while writing from his home on the Connecticut coast, Moix uses his outsider status to gain perspective on America’s traditions and cultural history. Twain had to return to the Mississippi many years after he began composing Adventures in order to be able to conclude it. Similarly, Santi engaged with this archetypically American work after returning to New York from a few years' hiatus in Barcelona.

Much as the Mississippi is Twain's La Mancha, the book's river is also a deeply-felt symbol for Moix's life and art —a flow of fissile and mutable identities, personal and national; an agent of tension between a fluvial nomadic life and the fixity of civilization. Through Huck and his Adventures, Santi Moix illustrates the insight central to all great artists and writers: that art is ever-young and never docile.