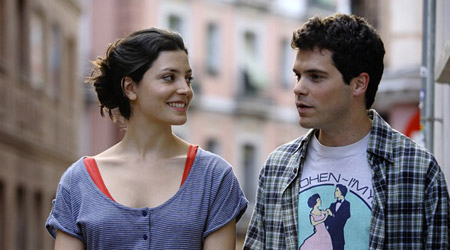 Spanish Cinema Now! is one of the Walter Reade Theater’s longest-running series, first presented in October 1992.

Since 1992, annual film production in Spain has moved from about 40 movies per year into the triple digits. Audiences in Spain are not only growing, they are considerably younger nowadays, while the links between Spanish and Latin American cinema are stronger than ever. Latin American actors, directors and technicians are enriching the Spanish industry, and co-productions are at an all-time high.

The series opens with the new film from Nacho Vigolondo (Timecrimes): Extraterrestrial, his smart, much-anticipated take on the alien invasion movie, in which a man and a woman wake up to a Madrid dotted with spaceships, the night after a tryst. Regional cinemas continue to produce strong work, as seen in the fascinating Catalan documentary Barcelona Before or the magic realist Galician film Crebinsky.

The festival also offers a 10 film tribute to Luis García Berlanga, one of Spain’s greatest directors, who sadly passed away in November 2010. Together with Juan Antonio Bardem, Berlanga revolutionized the Spanish cinema in the Fifties and early Sixties with such masterworks as Welcome Mr. Marshall!, Plácido, and The Executioner.

The screenings are in Spanish with English subtitles.

Spanish Cinema Now! is presented by the Film Society in collaboration with the Spanish Film Institute (ICAA) in Madrid and the Instituto Cervantes in New York. Special thanks also to the Spanish Consulate General in New York.