Max Esteban's 'Proposition One: Only the Ephemeral' 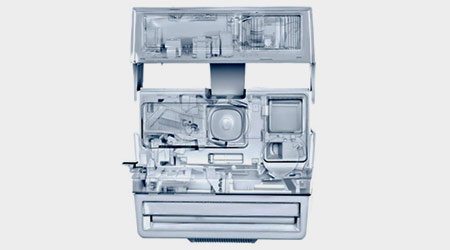 Klompching Gallery presents an exhibition of contemporary photography by Max de Esteban. This will be Esteban's first solo exhibition in New York City.

Esteban's overall photographic practice explores socio-political concepts within visual structures of serialization and repetition. The exhibition features his most recent body of photographs, Proposition One: Only The Ephemeral.

With this new work, he turns his camera toward recent cutting-edge technology-utilized in the creation and communication of art-that is now considered obsolete. Through a time-consuming and meticulous process, he disassembles apparatus such as film projectors, 35mm film cameras, VHS tape players and record players. Piece-by-piece, the parts are painted white, the machines are then reassembled and photographed at different stages of being re-built. The photographed layers are themselves assembled into a single image, resulting in x-ray-like photographs that are reminiscent of architectural cyanotypes. These exquisite pigment prints provide the viewer with a rare glimpse into the internal workings of retro technology, that are at once beautiful for their simplicity and ingenuously complex in their design.

The precision inherent in the photographs bring to mind the idea of a technological taxidermy that removes nostalgia, yet performs the role of memento mori for machines that have become obsolete and may soon be forgotten.

Max de Esteban (b. 1959) is a former Fulbright Scholar who studied Philosophy and holds a Ph.D. from the Universitat Ramon Llull in Cataluña and a Masters degree from Stanford University. His work has been featured at Fotofestival 2010 in Lódz (Poland), where he was awarded the Grand Prix Jury's Special Award and at the FotoTageTrier 2010 Triennial (Germany). Also in 2010, he was awarded the Spanish National Award of Professional Photography Gold LUX and his work was selected for the 2011 Photographers:Network, resulting in his Elegies of Manumission series being featured on the cover of the distinguished ProfiFoto magazine. An interview about the same series was published in HotShoe magazine (Feb-March, 2011). More recently, he was named a Finalist for best Portfolio at Encontros de Imagem 2011. Max de Esteban lives and works in Barcelona, Spain.