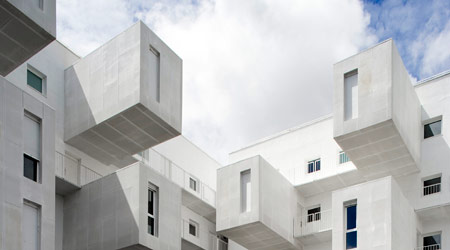 The primary aim of the Young Architects of Spain exhibition is to discover a generation of Spanish Architects under 40 years of age who are admired by their professional peers.

The exhibition shows that architectural excellence is found not only in the work of internationally renowned Spanish maestros, but also in the unknown work carried out in the studios of a new generation of professionals, which ensures a promising future for Spanish architecture.

The works were selected by means of a public competition open to all young Spanish architects. The more than 700 projects underwent an individual selection process by the members of an international jury composed of prestigious architects such as Alberto Campo Baeza and Manuel Blanco and the architecture critics Kenneth Frampton and Juhani Pallasma.

The presentation of Young Architects of Spain: A Window to the Unknown in Dallas is part of the cultural program SPAIN arts & culture. It is made possible through the generous support of the Spanish Agency of International Cooperation for Development (AECID in Spanish) of the Ministry of Foreign Affairs and Cooperation, the Spanish Housing Ministry, the Spain-USA Foundation, and the Embassy of Spain in Washington, D.C. Special thanks to The Honorable Janet Kafka, Honorary Consul of Spain in Dallas, for her efforts to bring this exhibition to Dallas.

Opening Reception: Friday, November 11, 2011 from 6 pm to 8 pm. This exhibition is free and open to the public.