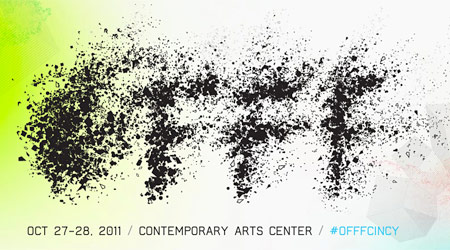 More than just a post-digital culture festival, the Spanish event featuring contemporary creation OFFF is now on tour throughout the USA.

OFFF is an entity in continuous transformation, alive and evolutionary. More than a decade ago, it was born as a post-digital culture festival; a meeting place to host contemporary creation through an in depth program of conferences, workshops and performances by the most relevant artists of our time.

These days, OFFF continues to be a reference event throughout the world. A festival hosted in Barcelona, New York, Lisbon and Paris which has featured renowned artists such as Joshua Davis, Stefan Sagmeister, John Maeda, Kyle Cooper, The Mill, Digital Kitchen, Julien Vallée, and Alex Trochut, among others… In October, the OFFF phenomenon lands at Cincinnati’s CAC, following its evolutionary tour.

OFFF Cincinnati will take place October 27-28 at the Contemporary Arts Center. For one and a half days, thought-leaders, enthusiasts and advocates from across disciplines will participate in a creative festival like no other. OFFF Cincinnati gives you the chance to play with some of the most notable creatives making headlines around the world today. This is your invitation to see what the future looks like.