'Esteban Vicente in America: Collage, Color, and Somewhere in Between' 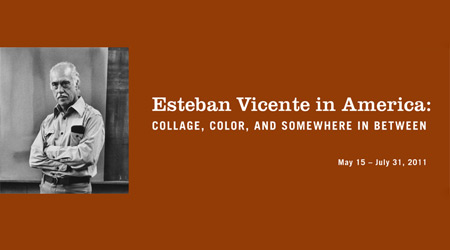 Esteban Vicente (American, b. Spain, 1903-2001) arrived in New York about a decade before the movement known as Abstract Expressionism began to coalesce.

Amid American and European émigré artists, Vicente was exposed not only to a gamut of aesthetic philosophies, but also to the spectrum of artistic entourages in New York.

Esteban Vicente in America: Collage, Color, and Somewhere in Between brings together works and corresponding ideas encountered by Vicente along a trajectory that started in his native Spain, led him to Paris, and finally guided him to the United States. The exhibition includes art by Vicente’s colleagues, most of whom he admired, some of whom he emulated (and some of whom emulated him), and some with whom he at times differed. Also featured are works from an earlier generation of artists whose engagement with collage predated the acceptance of the medium as a fine-art form in America. Vicente walked in the circle of all of these artists, which included Hans Hoffman, Willem de Kooning, Robert Motherwell, Mark Rothko, and several others. With certain personalities there were close interactions, while with others, as formal or circumstantial evidence indicates, the exposure to their work came through exhibitions or studio visits.